Click on the links below to find out more about each writer.

Crossfire: Once a normal teenage girl, now an Amazon warrior. Add in a bunch of kick-ass preternaturals and one maniacal demi-god and what have you got? The worst birthday ever!

Thunder: A rift between the layers of the world. A talking horse. Evil Sliders. What's a girl to do when she's the only one who can save it all.

Archer: Mmmm. Shoot an apple off his friend's head or lose his food, horse and clothes? Some decisions require little thought.

The Faithful: According to I Fidele, non-psychics are cockroaches. And the extermination is about to begin.

Greco: When his estranged mother is kidnapped, Greco must face his past and the secret that could destroy his future.

Rogue: The Grand Canyon holds many secrets, one of which thrusts Carter and the Omega Group into a thousand-year-old battle.

Pandora: Pandora’s box has been opened, and it contains far more than just illness and strife. Closing it will pit Mirissa against her most formidable foe yet—the Greek gods themselves.

Chaos: Orano must prevent the high priestess from succeeding in her quest for world domination, but first he’ll need to keep his own demons at bay.

Five Weeks - a lifetime: The true journey of Clinton Jacob - a legacy of one small boy’s lifetime.

Rory: Stick his neck out to save the so-called friends who betrayed him? Would you?

Reagan: Reagan must decode the mysteries of white horses, crop circles and ley lines to save his people. No pressure, then.

Slater: Knowledge is dangerous. What Slater knows about the altar stone could prove fatal.

Geraint: Purest Evil threatens Renegates and Townies alike. Can Geraint unite these warring factions in time to save Oxford?


Death Wishes: When Jo Gold dies, all Hell lets loose in Heaven; she must live until her bucket list is fulfilled. Who better to help than a rookie guardian angel? Think Coke Break guy with wings. Yummy!

Triple Jeopardy: Three girls, three decades, one outcome. These heroines have one thing in common – they attract trouble.

Fox Among Wolves: A smart cookie takes on a dark, edgy hero and a sexy, ruthless villain in this romance with muscle.

Wolf in Sheep's Clothing: A fragile mum clashes with an irreverent man-mountain under hazardous circumstances.

Big Bad Wolf : A Cowboy and an Amazon take on a jobsworth, a couple of psychopaths and a UXB in this explosive romp.

How exciting is this? Fourteen of the WWW books have featured in the Amazon Bestsellers lists. I think that deserves a bit more kudos. Isn't it amazing what a group of hard-working, committed women can achieve in twelve short months? 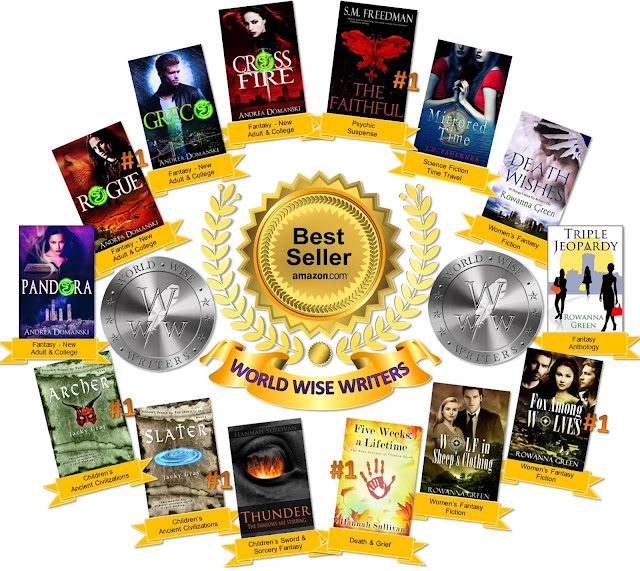 If you are a fan of the scrummy artwork on the majority of these books, check out the awesome Rebecca Sterling - she will turn your story into a Book!