Triple Jeopardy at a naught-y price

Ok, so I shouldn't go into a career writing headlines - the world can't take that much cheese.
Check out this limited offer - get your copy of Triple Jeopardy for free in the US or the UK.
Here's what the press says about it. 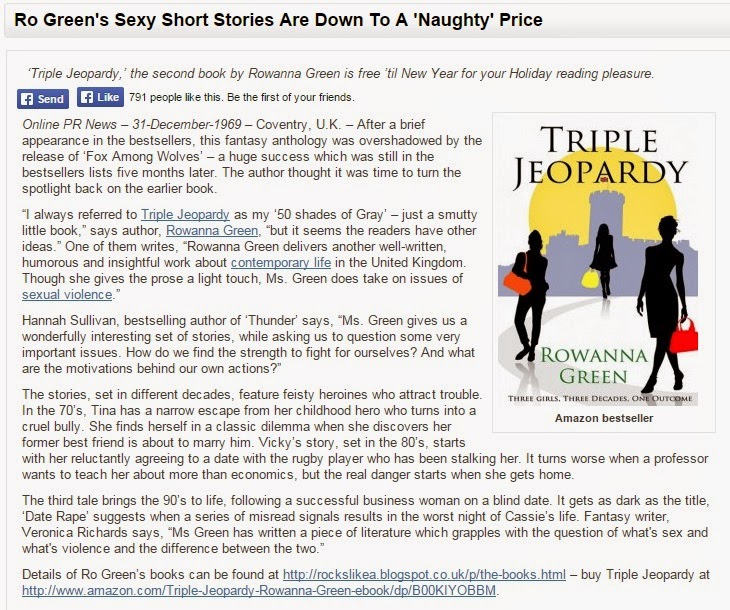 Posted by Rowanna Green at 08:54 No comments:

Your chance to win a book and have your name in print.

Apologies to my lovely colleague Andrea Domanski, who has been running a name that character contest for a while and to the 80's game show spoofed in the title (there is a weak link, I promise). I'm putting out a request for the names of 3 characters and the people who suggest the winning names will each receive a free copy of the sequel to Fox Among Wolves - working title is Sheep in Wolf's Clothing.

Here's what you do:
1. Read the descriptions below and decide which character you have a suitable name for.
2. Add your suggestions to the end of this post. As a tie-breaker, include a physical quirk or unusual mannerism I can add into the character's (small) part.
3. The character's names must be obviously Welsh (first and second name).
4. The names must not be too similar to any of the principal characters:
Caroline, Ginny, Jeremy, Ellie, Nathan & Reg Tremayne,
Bryn Evans, Rick Allen, Dennis Miller, Pete Gallaher, Steve Philips, Frank Williamson, Dale,
Crystal, Sian, Gloria, Megan, Andrea, Jemma, Helen, Rita, Lily, Tegan, Mr Jones, Hastings.

These are the characters:
A) A middle-sized, middle-aged engineering manager with a young wife and baby daughter.

B) A 'mumsy' secretary with a twinkle in her eye and a soft spot for her charges.

C) A factory worker in the early months of her second pregnancy.

Have fun - I am looking forward to to your suggestions and ideas to give these characters an unusual edge.

Posted by Rowanna Green at 14:38 No comments: